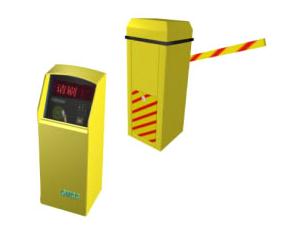 ((1) Type of Product : ˇˇˇˇMJSFJ-02 Type parking lot IC blocking equipment and toll collector (2) Shape of Product : Parking lot IC blocking equipment and toll collector (3) MJSFJ-02 Type parking lot IC blocking equipment and toll collector-----technological index : Adopting finance approved micro CPU design which has highly encrypting function Ł¨ DALLAS5002 Type CPU Ł© , and data and procedure are stored and transmitted according to encrypting way in order to insure the security of trade. Having SAM card seat, which can be installed PSAM card prescribed by construction department Ł» Adopting DES security algorithm, which can insure the security of data storing and transmitting. Adopting memory with big capacity, which can store more than 20000 records of cards reading and more than 4000 blacklists, and the stored data can be preserved for ten years after power supply is cut off. Having the standard RS232 port ability The taximeter has contact and c


Tianjin Global Magnetic Card Co.Ltd. (GMCC) is an enterprise to manufacture the products of financial and air transportation documents. It is the one of 520 national key large-scale enterprises defined the State Council; GMCC also is the manufacturer of anti-counterfeit printing and the supplier for IC card & system. In December of 1993, the company appeared on Shanghai Stock Exchange. GMCC has ever been chosen as one of the fastest developing and most potential enterprise by FORTUNE and became “1999-2000 Top advanced enterprises” defined by Asian Business Investment Company and” China Security News” .In 2002, the company entered the list of top100 advanced enterprises of Chinese information industry, and obtained membership of allowing of ETSI. Company initial capital is 551,650,000 RMB, and total assets are 3,099 million RMB, consist of 30 holding companies under its command with good management foundation and economics. In the field of card making, our company has already spread to network development, system integration, machines form a complete set, and card making and selling, which has become a quaternity. The market share of the products takes the first place in the whole country. According to the fixed goal of "internationalization", the products of cards made by our company have succeeded in squeezing into the international market,and been exported successively more than 20 countries and regions, including Australia, Holland, Japan, Singapore, Sweden, etc. And our company has established subsidiaries or representative offices at Australia, Pakistan, India, Japan and Hong Kong, and has formed the worldwide selling network.